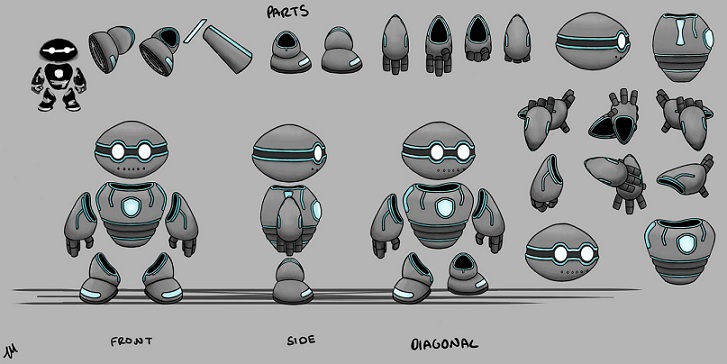 Even with time and resource constraints, you can create heroes that players will love. If you have good mechanics, don’t be afraid of problems with art – start from real possibilities. And remember that even the simplest stylized graphics can look cool. The main tools are stylization and generalization, they will help make characters recognizable.

In a fast development cycle, for example, when creating an indie platformer, you need to think not only about the appearance of the characters but also about the ease of scaling.

It’s good when the characters are easily replicated – the minimum amount of detail and a readable silhouette will help. The more complex the character, the more labor-intensive the production of graphics and animation.

In everyday life, we are used to seeing 2d game character design often. But understanding that a thing looks beautiful is not the same as knowing why it does. Any 2D image can be broken down into basic elements, so you can think of creating 2D graphics as combining these elements so that:

For example, we all know what a square and a sphere look like, but what does this have to do with creating an understandable-looking character?

The game designer creates a document with a detailed visual description of the character design styles, as well as the necessary animations, superpowers, and even cues – it is very important to get a relevant image. References are also attached there, and the task is sent to the artist.

The first draft sketches are created – 3-6 of the most different ideas within one concept. Sketches are usually done in b / w lines or “from the spot” to determine the approximate silhouette, image, and key details.

A general image is chosen, after which the forms and details are specified, various solutions for nuances are proposed. The elaborated sketches acquire the necessary appearance through feedback and clarifications.

After agreeing on the monochrome sketch, the color scheme of the character is selected, after the selection of which the last edits are made – the final sketch is obtained.

The final art is developed in Photoshop. All important details are created in separate layers, observing the hierarchy of overlapping objects on top of each other, as for the usual transition animation, which allows you not to draw each frame separately. That is, the legs are the lower layers, then parts of the body, elements of the face, clothes. The upper layers are the hand that is closer to the player, as it can overlap the body during the animation.

All layers are named according to the content and in English – this makes it easier to export and find a specific element of the character.

The final character also goes through the approval stage before the art task can be considered complete.

We store the finished art in .psd and sliced ​​sprites in .png + .json format, artists export such layered slices from .psd using the Photoshop To Spine script.

An important point: “readability” is very important for characters – they should not merge with the background, therefore heroes are always checked not in a vacuum or on a default substrate, but real game backgrounds. And since we develop mobile games, we test immediately on devices, and not on monitors, to understand how the player sees it.

This also works on complex projects – 2d cartoon characters should look harmonious in their surroundings.

From art to animation

When the style is developed and understood, 2d character designer can allow some deviations from the rules. If this makes your character truly special and valuable to the player, then you have the right to deviate from the canon without violating the stylistic harmony of the image.

It so happens that there are both far-reaching goals and ready-made pipelines with instructions, but there is a persistent feeling that there is still a lack of order in the project. Perhaps the drawdown is precisely in planning – there is no understanding of how much, what, and with what forces can be added to the game in the next update. And this is a very important point that many novice game developers forget about.

If you know how much time was spent on average on typical sample graphics, you can identify general timelines for each type of content, be it a character or some kind of standard interface button.

But even within the framework of one type, art can vary in the degree of labor intensity – this should be taken into account when planning, conditionally dividing graphics within the types into simple, ordinary, and complex in execution.

After that, game art company can predict the real-time by simple calculations for the character design process. Similarly, we predict labor costs for the production of other necessary graphics and divide the results by the number of artists on the team who will be developing.

Remember that extraordinary characters and fun animations can bring the simplest graphics.

GetInsta: The best way to get REAL and FREE Instagram followers and likes

The Best Tool for Converting PDF Files to PPT