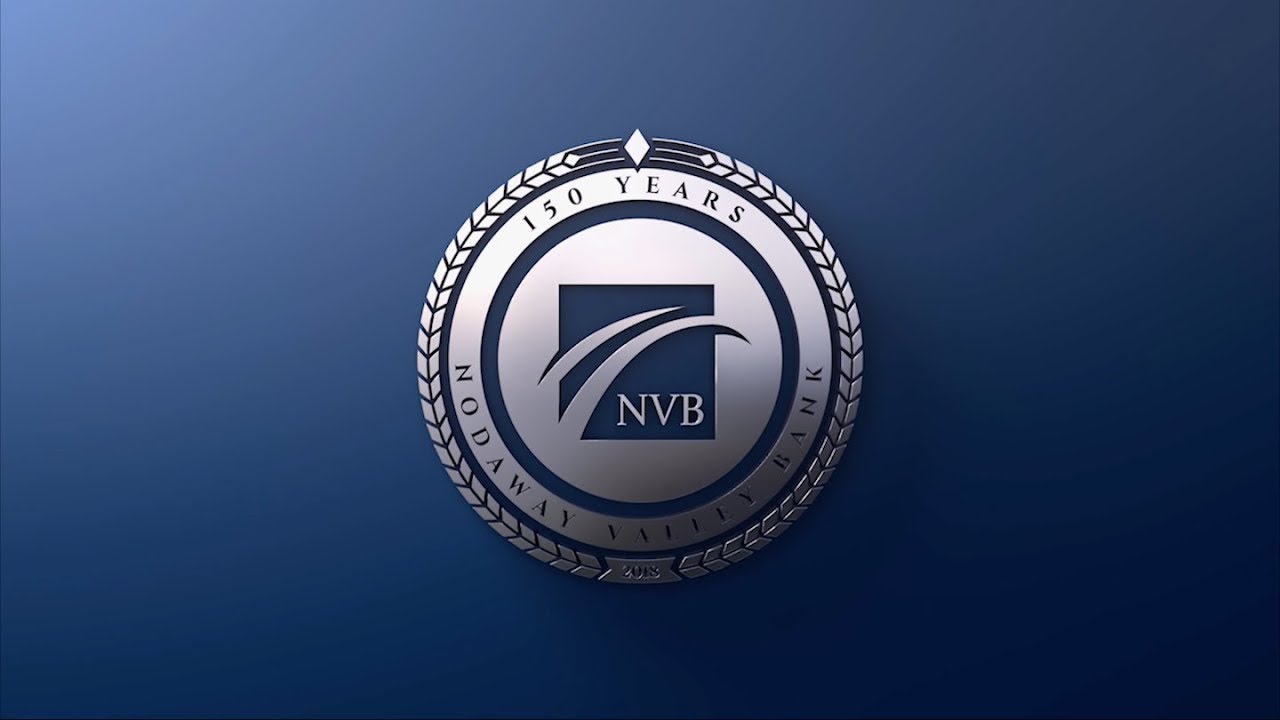 Although the actual date is not until December, Nodaway Valley Bank will be celebrating the 150th anniversary throughout 2018. On December 4, 1868, Maryville’s first bank, known as the George S. Baker & Co., Bankers, opened its doors for business on the site of the present bank on the southwest corner of Maryville’s town square at 3rd & Main Streets.

In 1873, James B. Prather, J. C. Waterman and Theodore L. Robinson acquired controlling interest in the bank and changed the name to Nodaway Valley Bank. Mr. Robinson was placed in charge of day to day operations, and a member of Robinson family has been at the helm since then, with Chairman of the Board James G. Robinson representing the fifth generation.

Theodore L. Robinson was an 11 year old orphan living with his grandparents when they moved to Buchanan County in 1844. Because his grandfather was unable to work their farm, young Robinson went to work at the Mansion House in St. Joseph where his industriousness caught the attention of one of the borders, pioneer merchant John Curd, who offered young Robinson a job in his dry goods store and the opportunity to attend school.

After his plans to cash in on the Gold Rush failed, Robinson reentered employment with Curd who sent him to Maryville in 1857 to set up and manage a general store. Robinson eventually bought the store and opened a lumber yard. He sold both business in order to buy an interest in the bank.

During the for the first 26 years of its existence, Nodaway Valley Bank operated as a private bank until applying for a state banking charter in 1894, now the fifth oldest bank charter in the State of Missouri. The bank joined the newly formed Federal Deposit Insurance Corporation in 1934.

Nodaway Valley Bank has weathered several economic downturns over the course of 150 years. According to Chairman Emeritus Theodore G. Robinson, the bank experienced growth during more recent agricultural downturns. Instead of acquiring troubled competing banks, Nodaway Valley Bank picked up dislocated customers from those banks which were unable to continue lending.

“Nodaway Valley Bank has always focused on customer relationships,” Robinson said, “and in some cases, we would have never otherwise had the opportunity to acquire that business. It has allowed us to grow with our customers.”

As a unit bank, state banking regulations prohibited Nodaway Valley Bank from expanding beyond Nodaway County until 1990, when the bank opened a branch in Savannah, followed expansion into the St. Joseph market in 1995, when the bank built a new 9,300 square foot building at the North Belt and Cook Road.

In addition to providing an opportunity to diversify its loan portfolio, the bank’s resources increased 63%, growing from $215 million to $350 million in five years.

In response to customers having to take more financial responsibility for their retirement, Nodaway Valley Investment Services was formed in 2002 to provide comprehensive financial planning and brokerage services. In 2003, the bank completed construction of a new facility at Riverside Road & Mitchell Avenue and acquired the Heritage Bank of St. Joseph, creating the largest privately owned and managed bank in northwest Missouri with assets in excess of $541 million.

In 2006, the bank completed the construction of two new facilities in Savannah and at Belt and Faraon in St. Joseph. In 2007, the Exchange Bank of Mound City was acquired, providing nine full-service locations in four communities. The bank’s resources topped $853 million at the end of 2017.

As part of its 150th anniversary, the bank introduced a new logo and a revised website formatted for mobile banking and a media campaign.

“We’re going to have some fun with some of the things that have happened over 150 years,” commented Chairman Robinson, “such as how many suckers we’ve given away and some strange loan requests that might have popped up.”

A bank with family values! We have been locally owned and managed since 1868. NVB has been serving the needs of northwest Missouri’s citizens for a century and a half.

When Should You Hire a Private Investigator? The Situations Explained