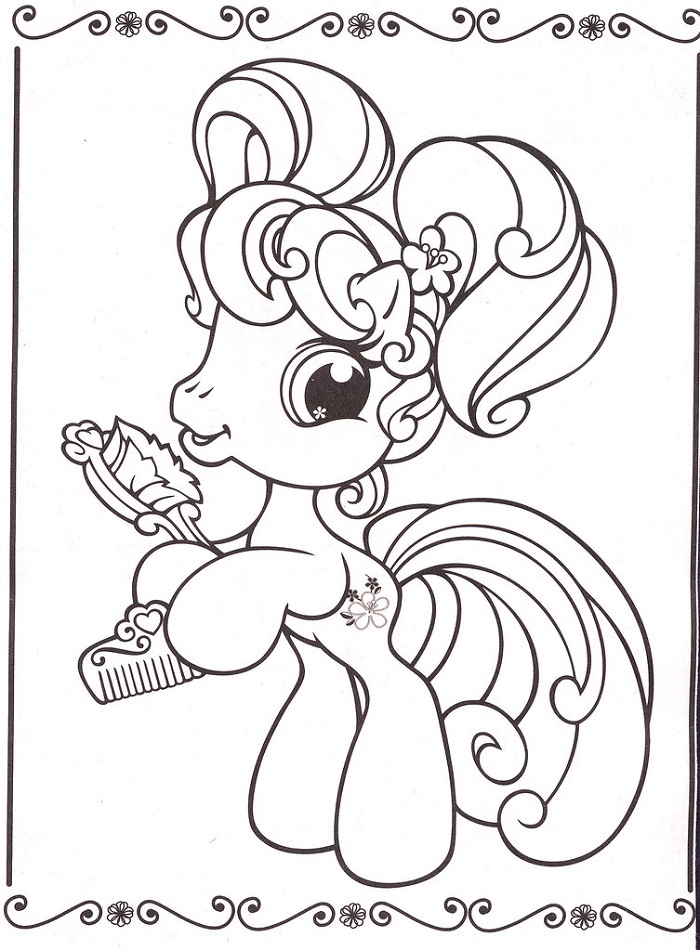 My Little Pony is one of the most famous toy lines among girls and boys around the world. These charming Ponys are unmistakable because they have colorful wings, long, glittering horsehairs and a unique symbol on one or both sides of their flanks, known as “cutie mark” If you like My Little Pony you are in the right place because you will find the best black and white coloring drawings of your favorite ponnys. All the coloring drawings of My Little Pony and his friends are here, don’t miss them!

My Little Pony is an entertainment franchise developed by Hasbro. It began as a line of plastic toys for ponies and later became an animated series called My Little Pony Friendship is Magic. My Little Pony has been renovated four times, each time with a new modern look to appeal to new generations.

The cartoon series revolves around colorful ponies with a unique symbol on one or both sides of their flanks. These symbols are called cutie marks in the series. It stars a unicorn pony named Twilight Sparkle, a student of Princess Celestia, the ruler of the magical land of Equestria.

Bring the world of colorful ponies home with this unique collection of My Little Pony coloring pages. The article includes all the main characters from this popular cartoon series.

Your little princesses may already have many of the toys and merchandising items in the franchise. Let them now experience the fun and imaginative interaction with the coloring pages of My Little Pony. They are already friends with the episodes of My Little Pony and know which of the ponies are what color. Let them paint and slap a buzz of color on these free Coloring Pages from My Little Pony.

As they color the pages, let the kids wander the Ponyville in their imagination. Twilight Sparkle, Rainbow Dash, Princess Celestia, Rarity, Fluttershy, Pinkie Pie, Applejack, Apple Bloom, Sweetie Belly and Scootaloo will keep the kids company while you can do other chores. The fictional land, Equestria, is full of vibrant, cheerful, and even vile ponies like Princess Celestia, Princess Luna, Princess Cadance, the Prince of Shining Armor, Cheerilee, Big Macintosh, Zecora, Princess Moon, Nightmare Moon, Queen Chrysalis, and the Shadow King. Print these fantastic MLP coloring pages for free!

Also Come in and have fun with Peppa Pig coloring pages. He also colors George and his friends in the fantastic and fun adventures of the most famous little pig on television. Join us with the images of Peppa Pig to print and make interesting discoveries that will make you learn the values of family and friends.

Women’s Activewear: Why Wear Them to the Gym?