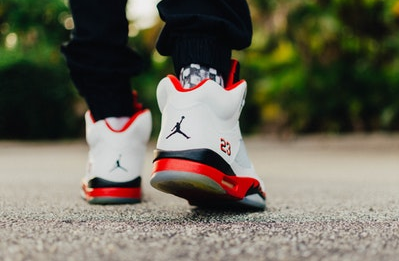 In 2020, a pair of Nike Air Ships worn by Michael Jordan in 1985, sold for $1.47 million, becoming the most expensive sneakers ever sold at auction.

Since Michael Jordan joined Nike to promote and sell a line of sneakers in 1984, sales of these shoes have skyrocketed in line with his success.

Nike’s been manufacturing these shoes consistently ever since, creating 26 different Air Jordan styles in the process.

All Jordan shoes have undergone a metamorphosis in line with the times. So, some of them are rather gaudy and tasteless by today’s standards.

However, some of these Air Jordan retro styles still have massive appeal for collectors and fans of the Air Jordan sneaker brand. In some cases, Nike saw fit to revisit the most popular versions of these timely classics.

The most popular of these are:

Also known as the ‘Black Cement’, or ‘Bred 4’, the original Jordan 4 has a black upper with gray accents, a red sole, and a white midsole. Despite its chunky design, it’s still one of the most attractive Jordans ever made.

These pine green retro high tops also form part of the “Black Toe” types of Air Jordan. They’re among the most exciting Air Jordan sneakers ever made.

These shoes comprise a distinctive pine green outsole, white tumbled leather, sail midsole, and a black leather swoosh. They’re so popular, they were re-released in 2020 after the success of the 2018 version.

The Air Jordan Retro Chicago is another one of the brand’s best creations, and they’ve gained in popularity once again after the movie The Last Dance came out in 2020.

This is the shoe that put the Air Jordan on the map. It redefined the way people saw basketball sneakers and created controversy from the start.

Initially, Michael Jordan refused the Nike endorsement due to the shoes’ red and black design, which he viewed as the ‘devil’s colors’.

No sooner had he relented, than the NBA fined him $5,000 for flaunting the league’s 51% rule. This rule states that players should only wear sneakers with at least 51% white coloring.

Nike embraced the resulting publicity, paying the fine and using this incident to market the shoes. Nike re-released the Air Jordan 1 in 1993 when the player unexpectedly resigned from basketball.

Not all the sneakers released under the Air Jordan label met with the same acclaim, though.

Let’s face it, there are some eras in fashion history that nobody wants to revisit. Despite the shoes’ wide appeal, some past Air Jordan designs fell short of consumers’ expectations.

Ironically, some of these have become sought-after collector’s items in modern times due to these fashion faux pas.

These years mark a celebration of poor taste, imitating the basketball star’s love of sports cars and Italian leather a little too closely. Most fans of the Jordan brand felt let down by the following designs:

Most of these shoes strayed far from the iconic look and feel of the Air Jordan 1, with triangular-shaped profiles and no high top.

Other styles of Air Jordans attracted criticism for being too similar to the celebrated original design. These include the 2012 version, the dull 2009 iteration, and the 1986 Air Jordan II.

In 2010, Nike released an Air Jordan with a unique transparent plastic window on the shoe. Fans were not impressed by what they viewed as a cheap gimmick, unsuited to this prestigious brand.

Air Jordan fans are a forgiving bunch, though, and they continued to support this brand despite these hiccups. There were a few other styles that enjoyed a lukewarm reception, but Nike still laughed all the way to the bank with these classics:

Released in 1994, the Air Jordan X took a more restrained approach and clean design. Yet, Air Jordan enthusiasts lapped up these new looks, hailing the 1994s as the gold standard for dress sneakers.

The Air Jordan VI first emerged as the shoe worn by Jordan during his first NBA. It’s the perfect combination of restrained detail, classic style, and cutting-edge design.

Launched in 1990, the Air Jordan V broke the mold with its shark-toothed soles and mesh side panels. It’s still considered one of the most tastefully executed and best Air Jordan designs.

Many other varieties of Air Jordans make a lasting impression for reasons unique to them. The 1983 Air Jordan III, designed by Tinker Hatfield, is what preserved Michael Jordan’s relationship with Nike after the failed AJ II.

They pale in comparison to the Air Jordan V, but they’re remembered for their contribution toward continuing the line.

Another Hatfield favorite, some view the Air Jordan XI as the poor relative of the X, but it’s still a firm fan favorite.

Made to resemble a panther’s paw, the Air Jordan XIII represents the best example of high-concept Air Jordan design and is still one of the most unique styles conceived by Tinker.

Step Out in Style

Despite their design pros and cons, Air Jordan styles offer all the comforts of the Nike brand including air soles, top quality materials, and superior durability.

So, love them or not, they remain a top choice for those wanting to make a style statement.

Would you like to review some more of the more iconic or forgettable fashions of all time? Browse our fashion section for all the glorious details.

LCG: EVERYTHING YOU NEED TO KNOW AND BROAGE SERVICES