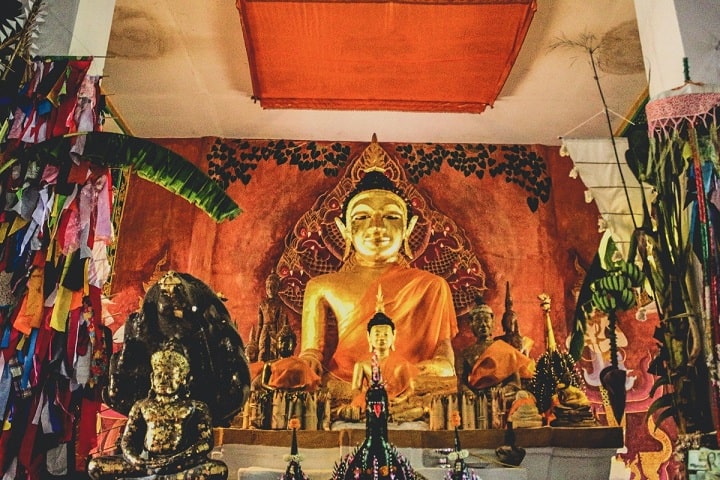 Shortly after death, a wake, or visualization, takes place in the deceased’s home. The body, embalmed or surrounded by dry ice, is displayed in a coffin. The head is placed towards the west. An oil lamp is often lit next to the coffin, and a photo of the deceased is often placed nearby. Sometimes the coffin is placed on an altar decorated with fruits and flowers. Friends and family bring food to the wake.

On the day of the funeral, Buddhist monks perform funeral rites in the home of the deceased, where the body is still in the state. The chief monk will usually offer a prayer consisting of praise for the deceased and comfort for loved ones. Next, the monks drape the coffin with a white cloth, called “Mataka vastra,” while they chant “sutras,” or prayers. Then the monks perform a “pansakula,” or blessing for the deceased, as family members sit on the floor in front of the coffin.

Traditionally, villagers would build a funeral pyre out of logs to perform the cremation, but in most places today, this ceremony is performed in a crematorium. Once the coffin arrives at the crematorium, a friend or relative says a few words about the party. Once the body has been placed inside the oven, family and friends return to the deceased’s house for a alms meal. This meal is made up of rice, pumpkin, fish and salt vegetables. Buddhists believe pumpkin comforts grief, while salty fish replaces lost salt for tears.

The day after the funeral, family members return to the crematorium to collect the ashes, which they either sprinkle over a river or place in a cemetery. On the sixth day after death, a monk delivers a sermon in the deceased’s house. On the seventh day after the death, family members have an alms given to the Buddhist monks at the home of the deceased. Monks are often given favorite foods by the deceased. Buddhists repeat this alms on the third month anniversary of death and on the first anniversary of death. At that point, grief officially ends.

Read Also: A Step by Step Guide to Planning a Funeral

What are Funeral Arrangements for Buddhists?

Within the Buddhist religion, the death of a person marks his passage from this life to the next. Buddhists believe in reincarnation, or the rebirth of a person into another form. For surviving family members, death is a reminder of the Buddha’s lessons about impermanence, and that all things change. Buddhism calls for specific funerals.

Buddhist bodies are traditionally cremated. Cremation, according to Buddhist tenants, allows the soul to escape the physical body and await reincarnation into another living being. Immediately after cremation, the ashes are usually spread outdoors. Some ash is stored in mounds known as stupas. Buddhists believe that a person’s soul is reborn through cremation again and again until he has reached a state of Nirvana. Nirvana is achieved when a person has achieved the right balance of “right thinking” and “right behavior” in their life.

The deceased’s body is normally kept for several days before cremation. This time allows family and friends to visit with the deceased, sing songs and bring blessings in the form of flowers and prayers. The casket is almost always open for viewing. Bringing flowers or other small gifts to the deceased is acceptable. A traditional offer is to bring the deceased a small book that contains the deceased person’s life story. Suitable attire for a funeral is dark, casual clothing.

Chinese Buddhists typically observe a 49-day Buddhist Funeral Services. Every seven days, prayers are offered to the deceased. The deceased’s daughters are usually responsible for the cost of the funeral. The head of the family presides over the days of prayer. A second type of Chinese funeral calls for prayers every 10 days until cremation takes place 100 days later.

Tibetan Buddhists also regularly observe a 49-day funeral service. A key difference between a Chinese funeral and a Tibetan funeral is that Tibetans read the deceased person to “Tibetan Book of the Dead.” The book is designed to guide the soul’s transition through reincarnation.

What Does Buddhism Think About Cremation?

The cremation of bodies is an ancient practice. There are studies that date the beginning of the use of this process in the 10th century BC. Nowadays, the ritual has been conquering more adherents of different religions, from Catholics to Spiritists. If you are a Buddhist, this article is for you! Throughout this text, we will address the view of Eastern religion on the process against burial. Read the article and finally understand what Buddhism thinks about cremation. At the end, you will still have some bonus information about other beliefs.

Find Out What Buddhism Thinks About Cremation!

What Buddhism thinks about cremation can be summed up in one word: tradition. In some countries, such as India (the birthplace of Buddhist traditions), cremation is considered the most suitable means of extinguishing a dead body. In this perspective, Buddhism is totally in favor of cremation!

In India, for example, public cremations are carried out on pyres (wooden structures) opened beside the Ganges River. Even family and friends can attend the rituals. For Buddhists, this is a very important action, as it allows everyone to leave their incense and candles near the fire. In Buddhism, most people are cremated. The ashes are kept in order to keep the memory alive of those who are gone.

The death of a Buddhist is the beginning of an intense prayer ritual. The prayers are said before the body is cremated, when it is on its way to where it will be. The ceremony involves the playing of instruments and the recitation of Sutras (sacred texts).

After cremation, the ashes should be stored in a temple or at home. When they arrive at the place chosen for their packing, new prayers are made. The prayers are repeated for 49 days, once a week. This is the length of time it takes a person to complete their life-death cycle and reach Nirvana.

What Buddhism thinks about cremation goes beyond religious opinions. There are other biomedical issues involved in the predilection for cremation. Burial is not a practice so well liked by Buddhists . The issue of burying people in cemeteries is considered complicated in several respects. The soil can become contaminated, disease transmission can occur more easily, etc. For Buddhism, cremation is the most appropriate and cleanest way to say goodbye to a dead body.