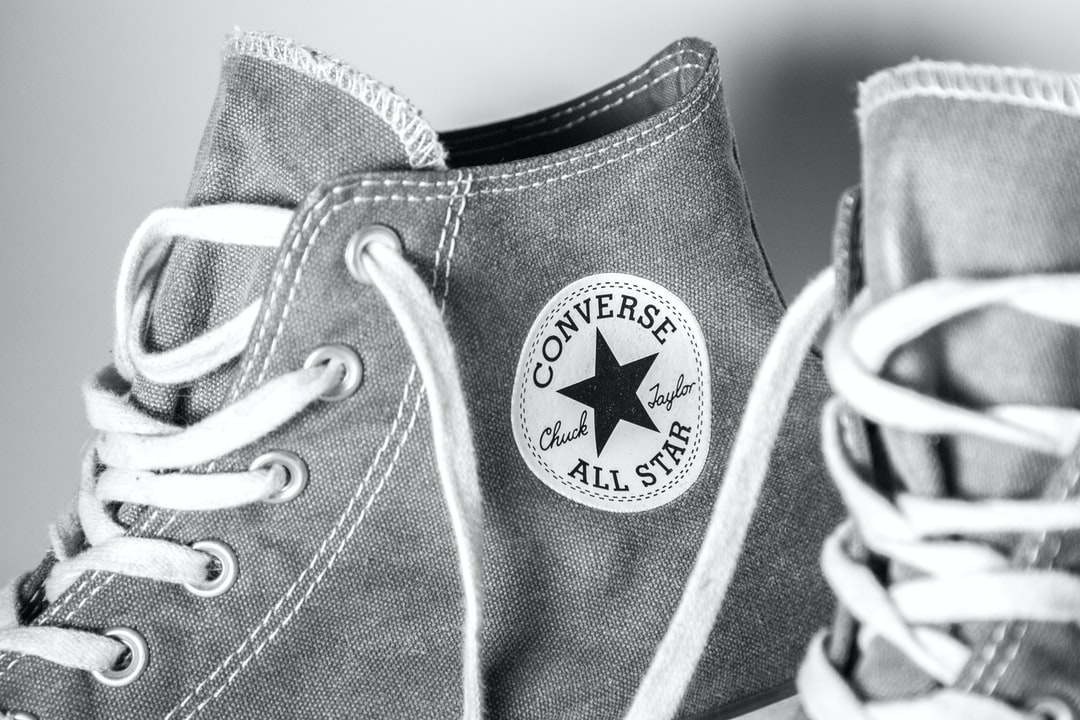 Did you know that Converse shoes have been around since 1908? If you are a fan of these sneakers AKA Chuck Taylor All Stars, we are here to get a bit nerdy and share the history of the Converse brand and Converse high top shoes. There is a lot more to these sneakers than you might be aware.

Read on to learn a bit of history.

In 1908, Marquis Mills Converse founded the Converse Rubber Company in Massachusetts. When the company was first founded, they specialized in rubber-soled footwear. At the time basketball was a fairly new sport, so soon after the company was established, Converse began its journey into designing and selling basketball shoes.

In 1917 the Converse All Star was introduced to the world with the name “Non Skids.” The design was a canvas upper with a rubber sole, arch and heel support, and a cushioned insole. This is also when its iconic diamond tread pattern was born, which helped with better traction.

In 1922, the Converse All Star became known as the Chuck Taylor All Star. This name change occurred because the basketball player Chuck Taylor became a salesman for Converse. Chuck Taylor gave his input about how to improve basketball footwear.

After a year of being with the company, Converse took Chuck Taylor’s advice and styled the shoe to provide better ankle support and more flexibility. This made the Converse Chuck Taylor the first celebrity endorsed athletic shoe in history.

For a few years after, Chuck Taylor travelled around the United States to promote the new Chucks, and he also lead basketball clinics to help increase the participation of basketball. In the 1930s, the new Chuck Taylor design had become a fan favorite among both college basketball players and professional players.

In 1932 Chuck Taylor’s signature was stamped into the ankle patch because he had become so synonymous with the shoes and basketball. To this day, the signature remains part of the heel patch.

In 1936, the official shoes of the Olympics became the Converse All Stars. For the Olympics, Converse designed the iconic white sneakers with accents of red and blue. To this day, this is one of the best selling color schemes for Converse.

The reputation for Converse grew after this momentous time in history for the brand. Not only were basketball teams wearing the shoes, but also American boys were wearing the All Star shoes to represent their country.

Chuck Taylor became the captain in the Air Force during World War II, and he coached regional basketball teams to help boost the morale for the troops during the war. The GI’s would complete their exercises in the white high top Chucks. At this point, that design and style became the official sneaker of the U.S. Armed Forces.

After the war, the classic white and black high top was released. By this time, basketball had become a major professional sport and the National Basketball League and the Basketball Association of America had merged, forming the NBA. The shoe for all teams became the black or white high tops.

Moving Away From Basketball

Over the years, sportswear technology developed and more brands started to compete in the market for basketball footwear. Around the same time, Chuck Taylor All Star were not as popular on basketball courts. Companies like Nike created tech innovations in their sneakers such as air cells and pumps which became more popular in the basketball and sports world.

The low cut All Star was introduced in 1957 and this model was quickly adopted as the more casual alternative to the high top. By 1957 Converse had 80% of the entire sneaker industry share. One year before Chuck Taylor passed away, he was called the “Ambassador to Basketball” because of how much he promoted the sport while he was alive.

The sneaker became more of a casual lifestyle shoe and by the 1970s it had become a symbol of self-expression. Everyone from students to skateboarders were rocking the sneakers instead of only sports players. Rock musicians, and younger generations, wore chucks in all colors and looks.

By 1974 the One Star Converse was released as the official low top sneaker.

During the 80s and 90s, Converse as a company began to experience some difficult times. The management and ownership changed several times, and they had a loss of market share.

These difficult times forced the company to file bankruptcy in 2001. Thanks to the brand being so well established, new owners purchased it to help save the company. The new ownership closed all the manufacturers in North America and moved the manufacturing overseas to Asia.

This change helped reduce costs and save the company. Eventually, after the brand was reestablished, it was purchased by Nike in 2003. In 2013, ten years after the purchase, the Converse brand had grown from bankruptcy to a $1.4 billion dollar brand.

The Malden Racer was released in 2014 by Converse CONS. This was a retro running inspired sneaker made out of suede. Converse Japan released a style called Tegami pack, and these sneakers featured details that were inspired by vintage strong closure systems.

In 2015, Converse launched the Chuck Taylor II. This was the classic shoe with an update. Nike added improvements to the original model, such as a lunarlon insole. But, after a year of being on sale, the model was discontinued.

Converse teamed up with Missoni on The Flame in 2016 to create a fun pattern model. The collection featured metallic threads that were woven into the fabric. During this time there was also a woven suede pack released and a reflective camo pack.

Also, an Andy Warhol collection was released that featured prints of some of Andy Warhol’s work. In 2017, the Fastbreak look was brought back from the 80s.

This year, Converse also collaborated with KITH on a Coca-Cola edition of the high tops. The special edition had Coca-Cola’s giant logo on full display.

In 2018, the Hong Kong label MADNESS collaborated with Converse, and they released a black suede model. They also collaborated with Vince Staples, a rapper, on another special edition model. On top of those two collaborations, Converse also released a 70s Vintage collection that featured the authentic colors of the 1970 models.

Several collaborations with Carhartt WIP were formed in 2019, where they released a few different designs. One of the designs released was an orange camo model that featured a ripstop upper nylon piece. Another design was military inspired Chuck ’70s, and a Goretex Pack that featured waterproof All Stars.

By 2020 black history month was celebrated by Converse where they released special editions of the Pro Leather and Chuck Taylor. Converse also teamed up with Moncler and Hiroshi Fujiwara to create exclusive All Star Low editions of the footwear.

Even with so many changes in the athletic shoe industry, Chuck Taylors are still popular today. Every week there are thousands of low cut chucks and high tops sold around the world. Their unisex design makes it so that both women, girls, boys, and men wear the same sneakers.

To date, there have been more than one billion pairs sold. The All Star Chuck Taylor is still a fashionable footwear for many generations, and new generations are still discovering the sneakers and adapting them to their lifestyle.

It is crazy to think that the basic design of this popular sneaker has not changed since 1949, but it still remains popular. From celebrities like Kristen Stewart wearing Chucks on the red carpet to being a trendy shoe option for weddings, Nike has really helped reshape the messaging of the brand from sports to self-expression.

Converse has worked hard to build a relationship with the creative community and attract a wide range of artists from different walks of life to wear their favorite Chucks.

Feeling Like a Pro About  Converse High Top Shoes?

Now that you’ve learned all about the history of Converse Shoes and Converse high top shoes, you might be more of a fan than before. Knowing the history of the company and its humble beginnings can be pretty inspiring for anyone looking to start a company nowadays. As you can see the last 100 years were not always rainbows and butterflies, there were hard times, but the company overcame them and they are still going strong.

If this article helped you out today, please continue browsing this section for some more fun reads.

How to Purchase Cannabis Safely Online: Everything You Need to Know