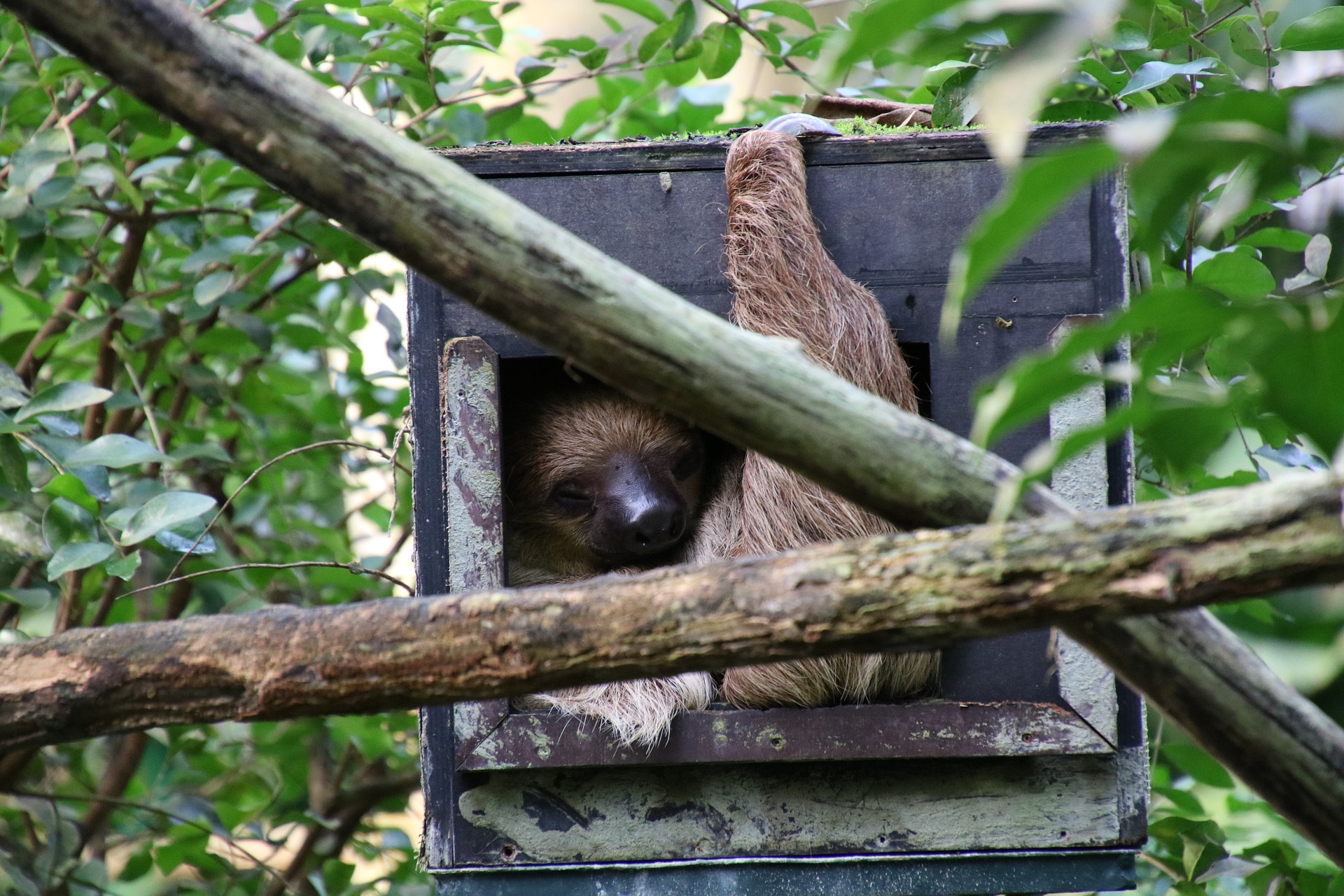 One of the most widespread mammals from the superorder Xenarthra group, sloths, are pretty popular with humans with their distinct features. You can see them all over the internet! It’s quite touching to see how humans love and interact with these slow yet sweet creatures. We will get to know the world’s slowest moving creature.

Have you seen the movie Zootopia? Then you probably have a remarkable memory of sloths. Although Hollywood movies are generally exaggerated, sloths in real life are really slow-moving creatures. Their slow-motion movements might seem like a disadvantage, but it has become one of their best assets for being a cute and majestic display for humans.

Before discussing other surprising information, the first thing you need to know from sloth facts is what makes them slow. Sloth’s metabolism brings its speed to the lowest extent. With a 25-30% metabolic rate, sloths do not have enough energy to make rapid movements as it does not even reach half of their body weight. The slow digestion does not make them fart.

Yes, they might be the slowest mammal on the planet, but they swim fast, quite surprising from their normal movement. Compared to their land movement, sloths can swim three times faster than their usual speed. On the other hand, what makes them more famous is their slow-motion movement, people find it cute and amusing!

Just like any other animal, sloths also need a defense mechanism. Provided that they are slow and predators could outplay them with agility, they do have natural mimicry. Sloth’s fur has a unique characteristic that allows them to camouflage with trees and nature. Especially that algae grows on their hair, they become an extra asset for blending with the environment.

Although it may seem quite unhygienic having algae grow on your fur, these algae also provide sloths extra vitamins and nutrients for their skin. The green algae that grow on sloths give them numerous benefits, and it benefits the algae as well since it serves as their water and shelter.

So sloths are typically slow in all aspects except swimming; how long does it usually take them to digest? To break it down for you, it takes them 30 days. Yes, a month for digesting. Their stomachs have a multi-compartment to digest their consumed cellulose even for longer durations.

You’re probably curious about how long they last in mating, given that they are so much slower than everyone else. Do sloths have longer and more passionate climaxes compared to other animals? Quite surprising how fast they are with this one; a sloth only takes 5 seconds for mating.

Wild animals or other mammals usually have different smells, provided that they all live in several ecosystems. Although they have their hygiene, some mammals have a natural foul smell. But unlike most of them, sloths are stink and sweat-free; their natural defense mechanism protects them from predators.

But of course, they are not totally clean! Given that algae grow on their fur, you cannot expect them to be neat. Although they do not smell foul, they do have bugs and insects living under them. So no matter how cute and cuddly they may seem, you might want to keep a safe distance for safer measures!

Just like humans, animals also have their weird me-time when defecating. Especially for sloths, they do take extra efforts for pooping. Sloths perform poo dances, and they have a special place for their poops too. They provide a particular spot on the ground, do the poo dance by swaying left and right then bury the poop. Weird, yet cute.

We usually see sloths on social media hanging on trees. That is one of their main habits; ever wondered how long do they usually hang? Another sloth fact is that they spend 90% of their lives hanging upside down on these trees. Their natural body structure allows them to do so. They are weightless on some parts because of their unique rib cage attachments.

Quite an unfortunate event, but a sloth was mistakenly identified as an alien at Panama City and was beaten to death with sticks and rocks by a group of teenagers. It was later discovered that the sloth came from a river accident resulting in its bald appearance and translucent-looking skin.

Sloths may always look like they’re smiling; that is because they only have a smiling face. Whether they are weary, stressful, or in pain, they still project the same smile. Although they may seem happy all the time, they also suffer from habitat destruction. Sloths are innocent and sweet creatures that also need extra attention.